As a holiday-maker, during my stay on Kos, Marmari resort, Greece, on 10-20 August 2017, I identified this problem: 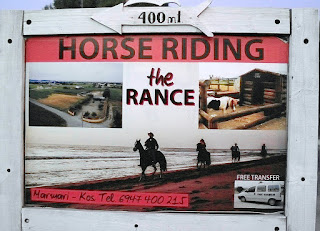 Greece, Kos, Marmari area, 10-20 August 2017. The eye-catcher enticing to horse riding in Marmari area, Kos. Definitely, a romance that is hard to resist for some holiday-makers, especially the young and women. 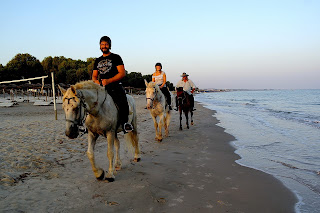 What a feeling to ride on the sea coast early in the morning! The blissful smiles on the faces of the two first young riders testify to it clearly. The last person, possibly the guide, has no happy expression; probably he feels it in his bones why there is no reason for him to give away his mood. 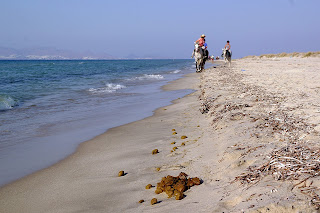 The dark side of riding in Marmari area, Kos. In some places, some testimonies to horse riding appear out of the blue - droppings (alias shit). 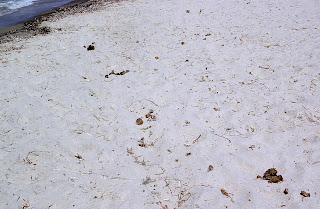 The droppings find their way both along the sea coast and on the sandy beach. 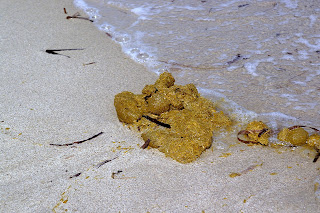 Sometimes, the sheer size of the heap brings  respect. 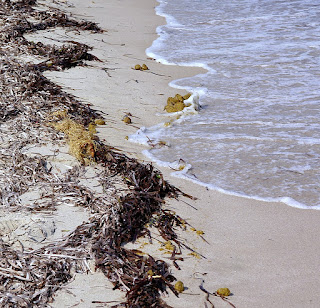 Fortunately, as soon as the sea gets wind of excrements it starts washing and cleaning - fast and thoroughly. 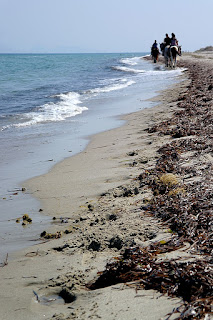 Rather soon, the large heap of faeces disappears in case there was sea water nearby to do its dutiful job. 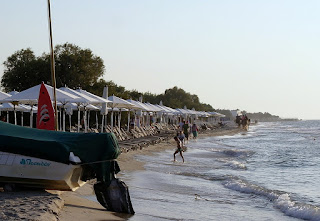 While riding, the riders on Marmari beach do care in order not to hurt anybody. Here are riders passing the blue flag beach!!! The sign says No dogs! But there is no sign forbidding entry for horses - so they simply see the green light to pass.

Traditional times for ridings are in the morning and before evening. But you may encounter the riders also during the day. 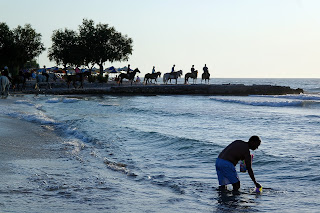 So far, sunbathers and riders in Marmari coexist peacefully. Overwhelming majority of holiday-makers do not see any problem at all. Maybe there is none, or is it? 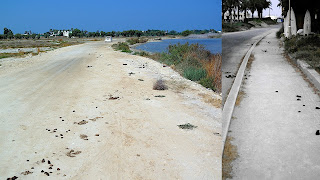 You may find dung also in the streets and pavements in Marmari, Kos. But this does not bother me at all. I consider it internal matter of the Greeks. Each nation may set its own rules for way of living.

On the other side, droppings both on the beaches and in water are not so hygienic and pleasant.

The solution is quite simple. The Greek law may stipulate the obligation for horse owners to provide the horses with sacks in order to prevent falling excrements accidentally to the ground during the horse riding on the beaches.

Will anybody from responsible Greek authorities care?

Kos is a beautiful island. Upon arriving  there you must fall in love with it. The question is will it stay so forever?

All photos in larger size

My Xiaomi Redmi Note 4 bought in 2017 was driven by Android version 6.0.1 and MIUI version MIUI Global 8.2 /Stable. In the past I used the smartphone run by Android 4.1. As soon as I got the new smartphone I had to deal with some unexpected troubles that took me significant time to overcome. I hope my experience may be useful for other happy owners of this phone.

The surprises for the novice to overcome

First, I am a heavy user of GPS, in particular in recording gps tracks. I did not suspect to encounter any problem here. I use regularly Locus application. After installing Locus app I found out that the gps signal is acquired really fast. In fact, it is a matter of a few seconds. That was a pleasant discovery. The worse was, however, to come. On my way from home to work by bike I started GPS recording in firm belief that after arriving to my destination I will have the all track recorded without any problems. To my surprise, I had just 2 points recorded, the starting and the end. I spent several day investigating and searching on Internet the cause of the trouble. In vain. Then I visited the vendor of the smartphone and got none the viser. My searching discovered that the problem lies in the fact that as soon as the display goes off or the smartphone is turned off, the Locus programme stops recording at once. Then I tried several other gps recorders (apps). The result was annoyingly the same. All the apps did not work permanently. That was a new problem for me. The older Android version worked without any hitch regardless of the on/off phone status. After many trials I discovered that the culprit is the unfortunate default setting in Security/Battery/App battery app. In Locus programme, I had to change Background settings to No restrictions and set Background location to "Allow". The crucial setting was "Allow" that enables apps to use location services in the background. This setting must be done individually also for any other gps recording app. In the end this solved the mysterious problem.

First I installed an additional SD card. Then I connected the Xiaomi to my PC (OS Windows XP) but was unable to figure out how to transfer files between PC and my smartphone by using a cable with USB port. As I have two OS installed, then I tried Ubuntu OS. The result was negative again. After many trials and errors I installed an app called USB setting. Then I discovered that when I swipe down, touch USB for charging icon, then switch to transfer files (MTP), suddenly, I was able to see both Android internal and external SD card and move files between two devices.